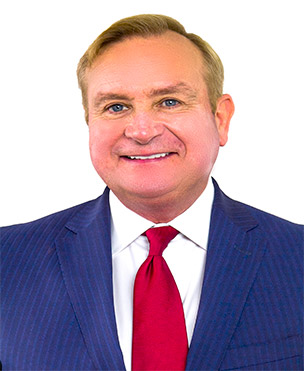 Mr. Childers graduated from the Catholic University of America in Washington D.C. in 1990, where he was an editor of the Law Review and a senior member of the National Moor Court Board. Mr. Childers also graduated in the top ten percent of his class. After graduation, he was an Assistant Public Defender with the Alexandria Office of the Public Defender where he represented thousands of the indigent and poor within Northern Virginia. In 1993 he opened his own firm and later became associated with James T. Bacon, Stephen D. Halfhill and Warner F. Young III, to form the Childers and Associates personal injury law firm.

Mr. Childers experience as a personal injury lawyer, as well as his ability to comfort clients throughout the difficult litigation process make him an excellent asset to have in your corner. Mr. Childers has represented hundreds of injured victims and won millions of dollars in damages in auto accidents, tractor trailer accidents, motorcycle accidents, traumatic brain injuries, medical negligence, premises liability, distracted drivers, pedestrian accidents, wrongful death, spinal injuries, personal injury and slip and fall cases throughout Northern Virginia including Manassas and Woodbridge.

Mr. Childers is a member of the Virginia State Bar, the Virginia Trial Lawyers Association, the Million Dollar Advocates Forum, the Brain Injury Association of America, the American Association for Justice, and the Academy of Truck Accident Attorneys. Mr. Childers has been voted the #1 Attorney in Prince William County 7 times by InsideNoVa voters. He was also recognized by Northern Virginia Magazine as Top Personal Injury Lawyers in 2017. Kevin Childers is a Five Star lawyer with Yelp reviewers.